Sooraj Pancholi is back on the silver screen with a special journey of Satellite Shankar connecting India.

The movie highlights Sooraj Pancholi as an army officer and his journey of self-discovery while exploring the beauty of India.

He says, “I have always wanted to play a soldier in a classic war or an action film. But this is not a war film, it’s not an action film, it’s a drama. The movie is about the life of every soldier – of what they see and feel in personal life. It’s not about a soldier’s life at the base camp. It is about a soldier, who is on leave and is going to meet his mother. It’s what he faces through the journey while travelling through India. So, it is looking at India from a soldier’s point of view.’’ 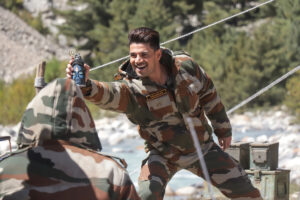 The film which has been shot in 10 location across the country including places like Chitkul in Himachal Pradesh and Agra in Uttar Pradesh. He says, ‘’It was hectic. But, travelling by road is an experience itself. And, it was my first time at Taj Mahal, too!’’

The movie also stars the south actor Megha Akash who is making her Bollywood debut. Speaking about her, Sooraj Pancholi says, “She’s a good co-star and a good performer.’’

The trailer of the film will be launched today.